A Camper is born at.EZee 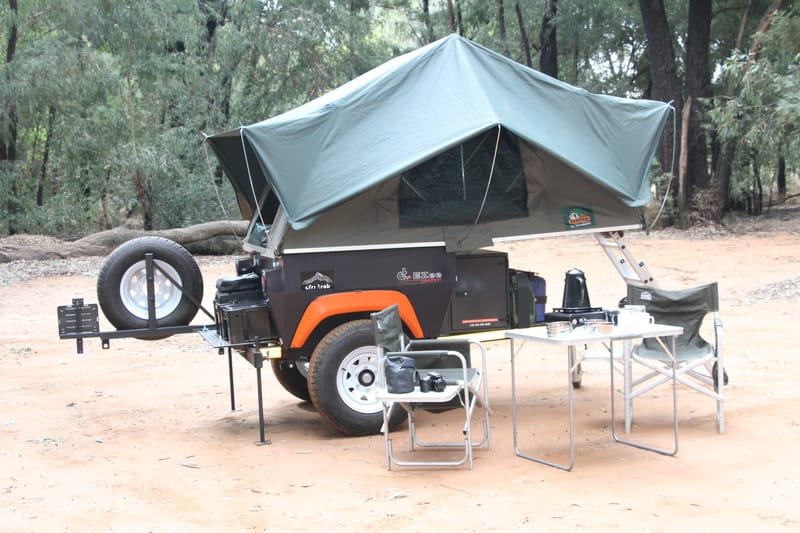 The at.EZee concept was a small camper that is capable of being able to be towed on road by a small car, and off road by smaller 4x4's such as the awesome Suzuki Jimny (and it's predecessors) and, vehicles such as the Daihatsu Terrios and Fiat Panda 4x4. The camper must be sturdily constructed to withstand rugged terrain as a companion for more powerful 4x4s.

Here are some of the pics as the build progresses.

The form from which the fibreglass body is to be built, is constructed from MDF (Medium-density fibreboard) over a pine frame. It is then sanded, filled and a few coats of spray filler are applied. After that, several layers of fibreglass are applied to the form. Once the mold has been separated from the form, the mold is used to cast the camper bodies in future.

Here we are busy constructing the sturdy frame chassis from 2.5mm mild steel lip-channel. Each chassis is hand made and finished.

The next task is to build the nosecone. The frame of the nosecone is constructed from aluminium tubing, using strong, durable corner fasteners. Then aluminium tread-plate is cut to size and attached to the frame with industrial strength tape that eliminates the need to use rivets. This tape is so strong that it is used to bind aluminium facades to skyscrapers and warehouses, but offers some degree of flexibility.

Now that at.EZee is really taking shape, we put all the major components together for a test fit. I am over the moon to say that everything fits as planned. Here are the first sneak pics of at.EZee.

What is missing from the photos above, is the roof top tent. This is a standard 2.4 x 1.4M RTT. The tent opens forward over the nosecone and draw-bar. Access to the tent is quick and easy, via a very short ladder from the front , or from the rear, by stepping on the integrated bumper.

I would like to highlight a few features that may not be immediately apparent.

Update 2020/06/10. After finally receiving the specially manufactured axle from the suppliers, (they are also at 50% workforce levels) we started final assembly of at.EZee's chassis #1 today. This is the X-Version, "X" stands for "Expedition" option. It is equipped with the larger 15" six stud wheels and sports higher ground clearance. It is meant for the more serious off roader that does not want to drag a heavy trailer along...

Aidan is fitting the axle and wheels. The next photos show the chassis from various angles, so one can get an idea of it's compact size. The last two photos are of the now fully completed mould, waiting for the fiberglass to cure fully before we take the pattern out and can start laying up the first actual body of the camper.

We have been held up a little waiting for suppliers to get up to speed and also because we have moved to a larger workshop, as the smaller workshop was just to small for our operation.

Update 2020/08/04. We have been working our behinds off, and have not had a chance to update the website, so my apologies to our visitors, but I will explain why.

Firstly here is a mock up of what our micro camper at.EZee will look like.

When we removed the fibreglass mould from the form, it was a total disaster. The cold weather had impacted the curing process and left horrible marks in the mould. We were dismayed by the unreliability of the fibreglass manufacturing process. We  decided to change direction and have the trailer bodies made from steel, which is a much more predictable process.

Aidan and I jumped onto the CAD system and translated the existing wooden form into CAD designs, using the dimensions and profiles that we had designed when building the original wooden form. The result was the body, chassis and assembly as below.

Once the CAD drawings had been completed we contracted a well known manufacturer of steel products to construct 2 bodies for us. We simply sent them the CAD files and they started building. They have the machinery to  laser cut the steel panels from sheet metal, bend them with CNC machines and weld the seams together, to form a complete trailer body. We also decided to incorporate the nose cone into the design so it will also be made of mild steel. For customers who prefer stainless steel, this option, as well as an aluminium option, will also be available in future. On 16 July 2020, we collected the first 2 bodies.

While we were waiting for the bodies to be completed, we contracted a trailer manufacturer to build the first two chassis's for us. We used the chassis that we had built previously as the basis for our CAD design, and also provided it to them as a sample. Once the orders had been placed, the two chassis's were delivered less than two weeks later, just in time for the arrival of the bodies.

And then the work really began.

The first trailer chassis was kitted out with suspension, tow hitch, and all the other pieces.

Then the body was fitted to the chassis and assembled fully. The doors and tailgate were installed, all the hinges and latches were pre-fitted to make sure everything would work on the final product. Even the lights were pre-fitted. Only once the tent had also been fitted, could we be sure that the camper's dimensions were all correct. It must be said that there were one or two small miscalculations, which we had to resolve, but overall the camper looked great and worked as designed. Along the way we took careful notes of what needs to be changed for body and chassis number 3.

At this point, we dissembled the entire camper, and began the process of painting all the components. The chassis was cleaned, prepared and spray coated with stone chip paint, which is a long lasting coat, that is hard wearing and rust resistant.

Then the work started on the trailer body, the steel was cleaned, de-greased, wet sanded to a smooth finish and then undercoated with several coats of durable 2K etch primer. The entire underside, inside of the body and nose cone were then coated with stone chip to match the chassis.

Then work started on the outer panels. The insides were masked off to prevent the outside paint from contaminating the areas that had already been sprayed. We then sprayed several layers of 2K colour coat, wet sanding in-between coats of paint and finished off with a final layer of clear coat, that will help to preserve the colour when the camper is used in the bush.

This whole process took us almost up to the end of July to complete.

Once the paint had dried over the weekend, on 3 August we began the re-assembly process. The shiny new trailer body was reunited with the chassis (which now had it's suspension and all the other parts fitted) and bolted on. Nosecone doors and the tailgate were attached, the hinges fitted and adjusted so that the gaps all around the closures were perfect. Locking door latches were fitted and adjusted. The rear lights were fitted and the wiring completed. The tent was then fitted and attached to the trailer body. Gas struts were attached and locking latches attached.

As we stand now, the camper now looks like a camper. The next steps entail polishing the paintwork, fitting accessories and a that all important road test.

We will then take the camper on a road trip to iron out any kinks and at the same time, begin the production process on body #2.

For some sneak pics of at.EZee (pre-launch) please click on the at.EZee link

I BUILT MY SITE FOR FREE USING